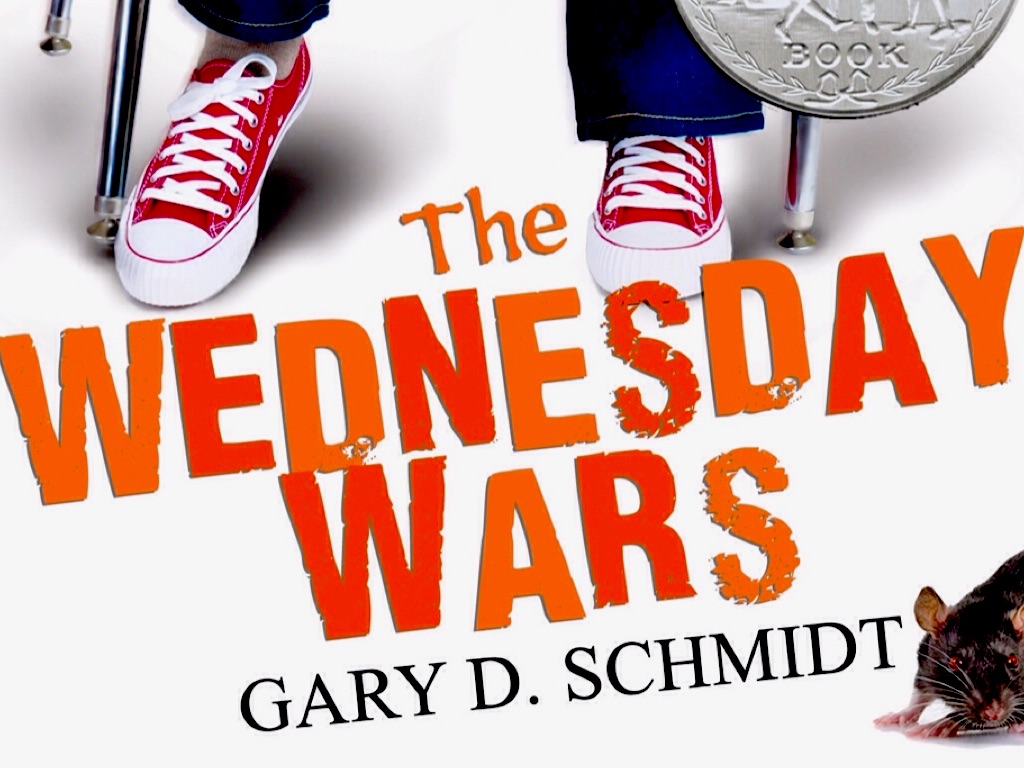 Book Review on The Wednesday Wars

Did your growing up years come with difficulties and troubles? Most people are faced with problems that feel like they are out of their control. Sometimes this can actually help us become a better person. Set during a troubling time in the 1960’s, The Wednesday Wars, follows a young boy on the brink of manhood who is faced with many different circumstances that ultimately help him to understand the adult world around him.

The book The Wednesday Wars is written by Gary D. Schmidt. This book is about Holling Hoodhood who is the only kid not in Catechism or Hebrew school, so he ends up spending Wednesday afternoons with his teacher. At first it is a struggle because he thinks his teacher, Mrs. Baker, is against him, but before long she becomes his mentor. The story is set at a school in Long Island, New York, during the Vietnam War. In the beginning Mrs. Baker assigns small chores to fill his time, but eventually he moves on to studying Shakespeare, adventures in baseball, and cross country running.There are also two escaped classroom rats that are present throughout the story. In this story Holling grows up while encountering several challenges and difficulties that shape him into a better person.

To Holling, Shakespeare is just an old, dead guy, but soon he starts to enjoy his works, so much so, that he fills his free time with reading and acting in The Tempest, a play written by Shakespeare. Holling learned that he could enjoy something that he normally wouldn't consider doing. He even learned a few new interesting cuss words from The Tempest. When he is teased about wearing yellow tights in the play, he is able to let it go, even though it bothered him, and this took a lot of maturity. Running was a past time that Holling had never given much thought to, other than running in PE class, until he was forced to try out for the cross country team. He discovers that it is fun and that he is good at it. When he finds out that Mrs. Baker was an olympic medalist for women’s running, he is willing to learn another life lesson from her coaching. He even make the varsity team due to a run in with the evil classroom rats.

Gary D. Schmidt does a good job of using present day events to show the reader how the things happening in the world affect Holling. Growing up in one of the most troubling times of the 1960’s Holling didn't really notice the affects of the Vietnam war at first, but soon he sees its impact on the lives of those close to him. Mrs. Baker’s husband is missing in action, while his friend Mai Thi struggles with being outcast because of her nationality. He also witnesses the grief that Mrs. Bigio, the lunch lady, experiences when her husband is killed in action. Just like most boys his age Holling was a big baseball fan. When he has the opportunity to meet his idol, Mickey Mantle, he is faced with the tough realization that even heroes can fall. Mrs. Baker comes to the rescue and arranges time spent with Joe Pepitone and Horace Clarke, two of the best New York Yankee baseball players. His faith in heroes is restored and he says,”it felt like a place inside me had filled again”. Not only is Holling changed through his world experiences, but also by his close relationships.

Schmidt describes Holling’s home as the “perfect house." Everything about it was perfect, from the cement blocks and flowers outside, to the plastic covered furniture and unplayed baby grand inside. Even though his parents have worked at creating a perfect home, the reality is inside it is far from perfect. We see Holling grow in spite of uninvolved parents and come to the support of his sister, when the parents seem to not care. Holling’s friends include Danny Hupfer, Doug Swieteck, Meryl Lee Kowalski and Mai Thi. The author does a good job of showing how each of these unique friendships teach Holling something more about himself and others. Through all sorts of different circumstances, both humorous and serious, we see Holling and his friends support one another. In some ways his friends were more of a family to him, than his own were.

I feel that Gary D. Schmidt did a very good a very good job of showing how the character Holling grew and matured through difficult and yet entertaining circumstances. The author’s use of a variety of experiences help the reader understand the world Holling grew up in. I think this is a great book for people to learn more about the 1960’s and it’s events and to see how they may have affected a young boy growing up in that time.